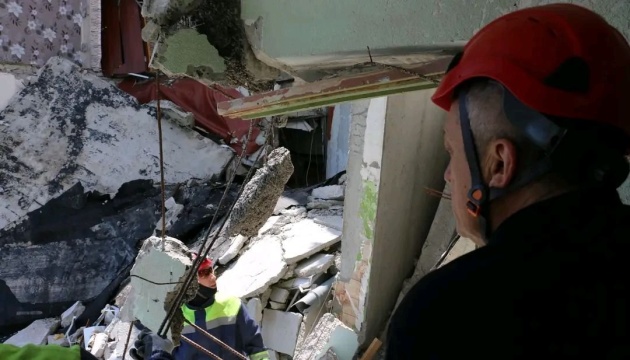 Four bodies of civilians have been recovered from under the rubble of an apartment block destroyed in Russia’s missile strike on the city of Kharkiv back in February 2022.

The relevant statement was made by the Main Department of the Ukrainian State Emergency Service in Kharkiv Region on Facebook, an Ukrinform correspondent reports.

“On May 31, 2022, the Ukrainian State Emergency Service continued emergency and rescue works, dismantling the rubble of a 16-storey apartment block in Industrialnyi District. Yesterday, on floor 15, using special tools, rescuers unblocked the bodies of two victims, a man and a woman. Today, two more male bodies have been recovered from under the rubble,” the report states.

According to the Ukrainian State Emergency Service, Russia’s missile strike hit the residential house on February 28, 2022, having destroyed apartments from floor 16 to floor 14.

A reminder that, on February 24, 2022, Russian President Vladimir Putin initiated a full-scale invasion of Ukraine, starting a war. Russian troops are shelling and destroying the key infrastructure facilities, launching air and missile strikes on Ukrainian cities and villages, torturing and murdering civilians.