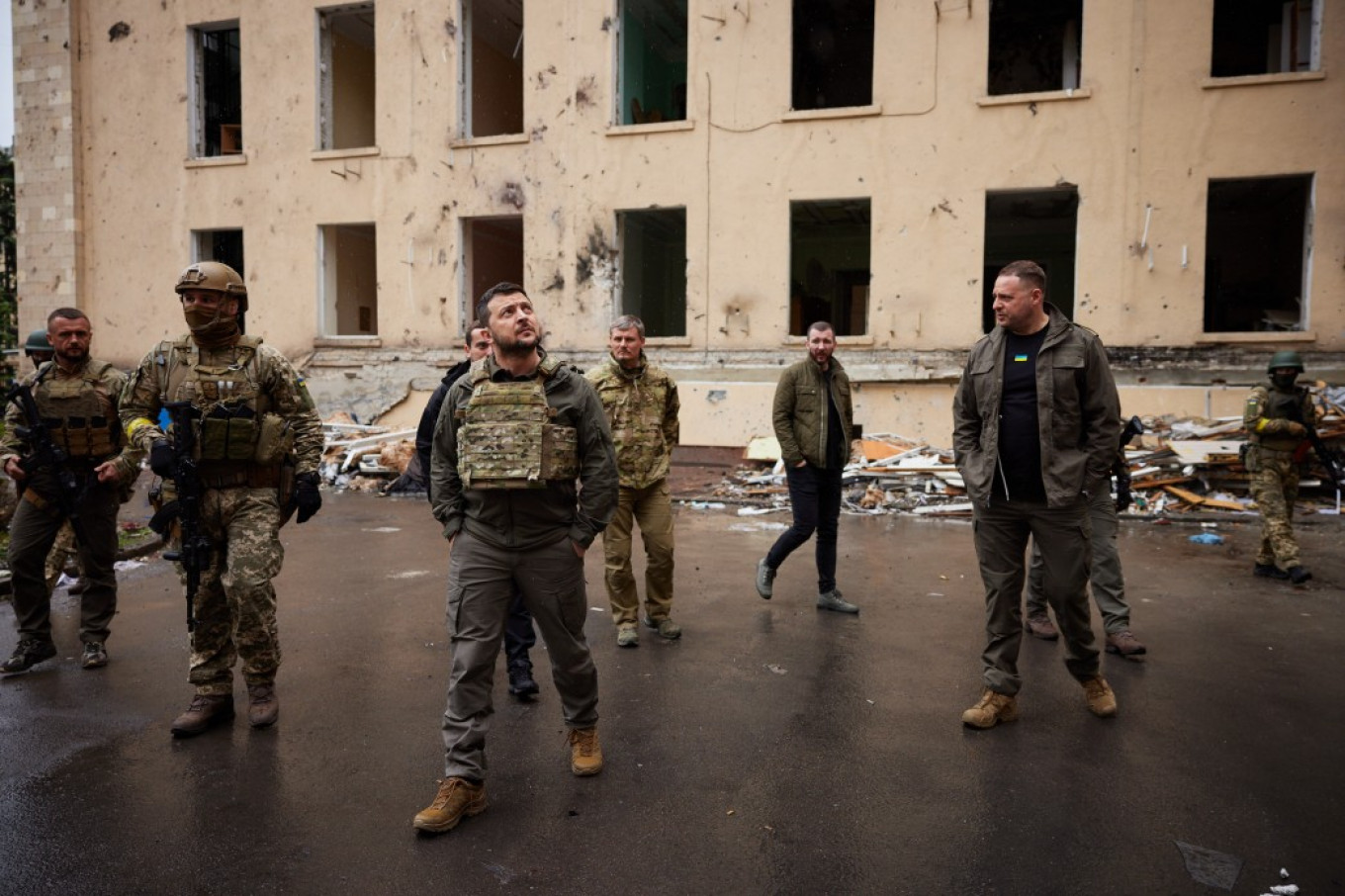 Ukrainian President Volodymyr Zelensky made his first trip Sunday to the war-torn east since Moscow’s invasion started, as Russian forces tightened their grip around key cities in the Donbas region.

After visiting Kharkiv, Zelensky announced that he had fired the northeastern city’s security chief in a rare public rebuke.

Zelensky said the man was dismissed “for not working to defend the city from the first days of the full-scale war, but thinking only of himself,” and that while others had toiled “very effectively,” the former chief had not.

Although the president did not name the official, Ukrainian media reports identified him as Roman Dudin, the head of the Kharkiv region’s SBU security service.

Earlier, Zelensky’s office posted a video on Telegram of the president wearing a bulletproof vest while viewing destroyed buildings in Kharkiv and its surroundings.

With the war devastating much of his country, the Ukrainian president is set to speak by video link Monday to European Union leaders in Brussels as they seek to break a deadlock on a Russian oil embargo.

Pressure on the east

Russia, since failing to capture the capital Kyiv in the early stages of the war and then retreating from the Kharkiv area, has shifted its focus to the eastern Donbas region.

Its forces said on Saturday they had captured the town of Lyman in the contested region and were upping the pressure on the twin cities of Severodonetsk and Lysychansk.

Zelensky has been based in Kyiv since Russian President Vladimir Putin launched his full-scale attack on Ukraine.

“In this war, the occupiers are trying to squeeze out at least some result,” Zelensky said in a later Telegram post Sunday.

“But they should have understood long ago that we will defend our land to the last man,” he added.

While one-third of the Kharkiv region remained under Russian control, “We will for sure liberate the entire area,” said Zelensky. “We are doing everything we can to contain this offensive.”

The situation in Lysychansk had become “significantly worse,” the regional governor of the Lugansk region, Sergiy Gaiday, said on Telegram.

“A Russian shell fell on a residential building, a girl died and four people were hospitalized,” he said.

On the other bank of the Donets river, Russian forces “carried out assault operations in the area of the city of Severodonetsk,” according to the Ukrainian general staff.

Fighting in the city was advancing street by street, Gaiday said.

Zelensky, in his daily address, described a scene of devastation in Severodonetsk, saying, “All critical infrastructure has already been destroyed… More than two-thirds of the city’s housing stock has been completely destroyed.”

In the embattled city, where an estimated 15,000 civilians remain, a local official said “constant shelling” made it increasingly difficult to get in or out.

“Evacuation is very unsafe, it’s isolated cases when we manage to get people out. Now the priority is for the wounded and people who need serious medical assistance,” said Oleksandr Stryuk, head of the city’s military and civil administration.

The water supply is also increasingly unstable, and residents have gone more than two weeks without a mobile phone connection, he added.

On Sunday, the Russian Defense Ministry said it had destroyed a Ukrainian armed forces arsenal in the southeastern city of Kryvyi Rih with “long-range high-precision missiles.”

Russian forces also targeted a Ukrainian anti-air defense system near Mykolaivka in the Donetsk region, as well as a radar station near Kharkiv and five munitions depots, one close to Severodonetsk.

On his trip to Kharkiv, Zelensky discussed reconstruction plans with local officials, saying there was a chance for areas devastated by Russian attacks to “have a new face.”

According to local officials, over 2,000 apartment blocks have been wholly or partially destroyed by Russian shelling in the region.

In Kharkiv itself, customers were returning to the well-known Crystal Cafe in the central public park after it reopened at the end of April.

Residents come by for a coffee, a bite to eat or to sample the “Biloshka” ice cream, a Crystal specialty the vendor has been serving since the 1960s.

“We need to keep employment. The city is coming back little by little,” the cafe’s manager, Alyona Kostrova, 36, told AFP.

The menu has been trimmed due to supply problems and the locale is operating with a reduced staff, down to seven or eight from 30 or 40 before the war.

Far from the city center in the neighborhood of Saltivska, where Russian shells continue to fall, the atmosphere is different.

“I would not say that people are buying a lot. People have no money,” said Vitaly Kozlov, 41, who peddles eggs, meat and vegetables locally.

Volodymyr Svidlo, 82, told AFP he “has no pension”, and comes “once a week” to the neighborhood to sell items, such as onions, dill and flowers from his garden in order to make ends meet.

When Zelensky speaks to EU leaders at their emergency summit Monday, he will press them “to kill Russian exports” as he seeks to crank up international pressure on Moscow.

A new round of European sanctions has been held up by Hungary, whose Prime Minister Viktor Orban has close relations with Russia’s Putin.

The landlocked country is heavily dependent on Russian crude oil supplied via the Druzhba pipeline.

Hungary has asked for at least four years and 800 million euros ($860 million) in EU funds to adapt its refineries and increase pipeline capacity for alternative suppliers, like Croatia.

But under a new proposal put to national negotiators on Sunday, the Druzhba pipeline could be excluded from a sanctions package, which would only target oil shipped to the EU by tankers.