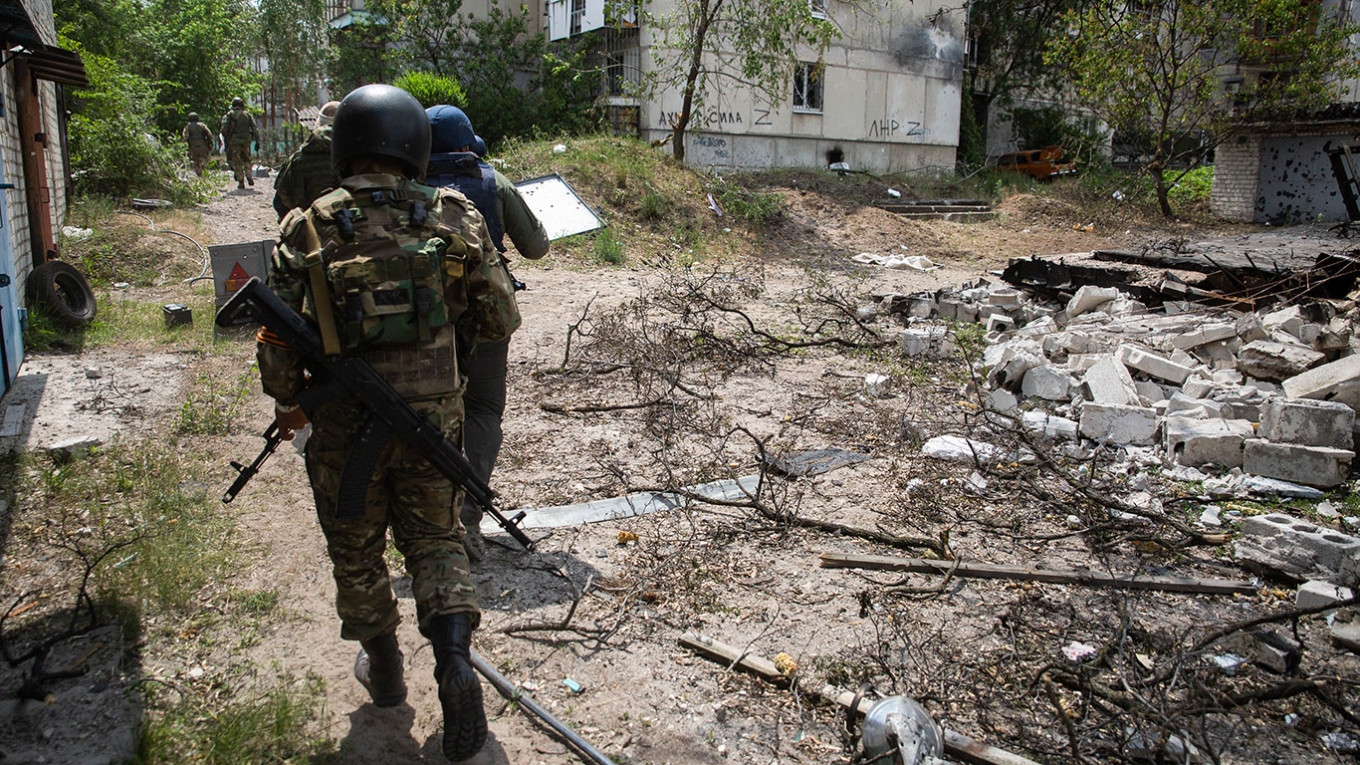 Russian forces edged toward the center of the eastern Ukrainian city of Severodonetsk Monday, while President Volodymyr Zelensky prepared to appeal to EU leaders at an emergency summit where a ban on Russian oil imports is on the agenda.

Zelensky is expected to press EU officials at the summit “to kill Russian exports” as he seeks to crank up international pressure on Moscow.

Member states are searching for a compromise on a sixth round of sanctions, which has been delayed by resistance from within the bloc, namely from Hungary.

Meanwhile, Russian forces continued their push in the eastern Donbas region, upping the pressure on the twin cities of Severodonetsk and Lysychansk.

Since failing to capture Kyiv in the war’s early stages, Russia’s army has narrowed its focus, hammering cities with relentless artillery and missile barrages as it seeks to consolidate its control.

The situation in Severodonetsk, just across the Donets river from Lysychansk, was “very difficult,” Luhansk regional governor Sergiy Gaiday said in a statement on social media.

“The Russians are advancing into the middle of Severodonetsk,” while the fighting continued, Gaiday said.

Pressure on the east

While Russia concentrated its efforts in the east, Ukrainian forces pushed back over the weekend in the southern region of Kherson, the country’s military leadership said.

At the same time, two people were injured following an explosion in the Moscow-controlled city of Melitopol in southeastern Ukraine, with local pro-Kremlin authorities pinning the blame on Kyiv.

Newly appointed French Foreign Minister Catherine Colonna also made the journey to the Ukrainian capital Monday for talks with Zelensky.

The highest-ranking French official to visit Kyiv since Russia invaded Ukraine on Feb. 24, Colonna also visited the town of Bucha, where Russian troops have been accused of committing war crimes against the civilian population.

In the eastern Donbas region, Moscow’s forces were making slow progress toward taking the city of Severodonetsk.

Zelensky, in his daily address Sunday, described a scene of devastation in Severodonetsk.

“All critical infrastructure has already been destroyed… More than two-thirds of the city’s housing stock has been completely destroyed,” he said.

In Severodonetsk, where an estimated 15,000 civilians remain, a local official said “constant shelling” made it increasingly difficult to get in or out while the water supply is increasingly unstable.

Ukrainian forces counterattacked in the region of Kherson, the only region of the country fully controlled by Russian troops.

Russia gained control over most of Kherson, which borders Crimea, in the early stages of the war and Moscow-backed officials in the region have recently pushed for annexation.

While limited in nature, the attack could have the effect of stretching Russian forces.

The Ukrainian General Staff claimed the move had put their adversary into “unfavourable positions” around the villages of Andriyivka, Lozovo and Bilohorka and forced Moscow to send reserves to the area.

In Melitopol, Russia-installed authorities said in a statement the city had been targeted by a “terrorist attack”.

According to the statement, a car packed with explosives exploded in the city centre, injuring two “humanitarian aid” volunteers, a 28-year-old woman and a 25-year-old man.

“The Ukrainian government continues its war on the civilian population and the infrastructure of cities,” the officials said.

A new, sixth round of European sanctions has been held up by Hungary, whose Prime Minister Viktor Orban has close relations with Russian leader Vladimir Putin.

EU ambassadors made a final push ahead of the summit to persuade Hungary to accept a watered-down oil embargo against Russia.

The landlocked country is heavily dependent on Russian crude oil supplied via the Druzhba pipeline.

Hungary has asked for at least four years and 800 million euros ($860 million) in EU funds to adapt its refineries and increase pipeline capacity for alternative suppliers, like Croatia.

But under the compromise proposal the Druzhba pipeline could be excluded from a sanctions package “for the time being,” an EU official told AFP.

Meanwhile, Zelensky on Sunday made his first visit to the embattled east since the start of the war, walking the streets of the Kharkiv region’s devastated capital in a bullet-proof vest.

While in Kharkiv, Zelensky discussed reconstruction plans with local officials, saying there was a chance for areas wrecked by Russian attacks to “have a new face”.

Despite an estimated 2,000 apartment blocks having been wholly or partially destroyed by shelling, the city has returned to a degree of normality in recent weeks.

While one-third of the northeastern region remains under Russian control, “we will for sure liberate the entire area,” the Ukrainian president said after the visit.