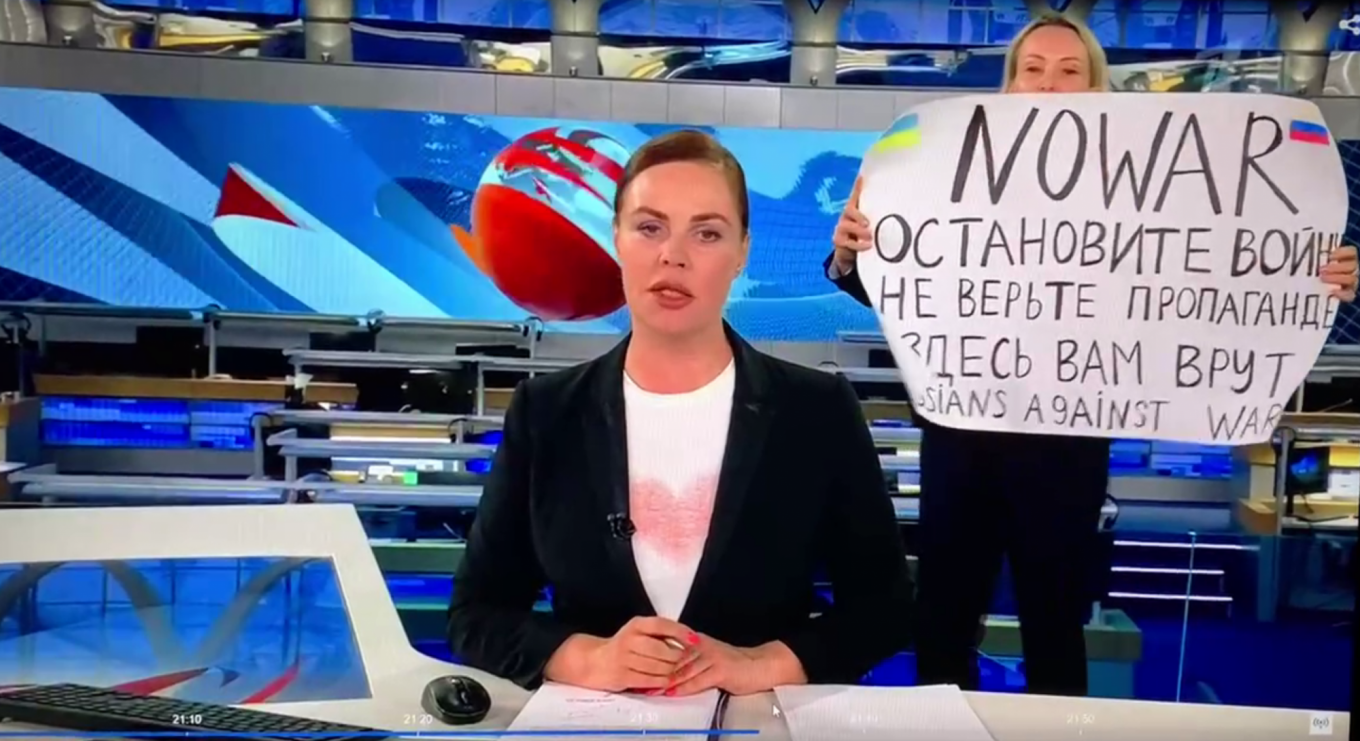 On May 25 Marina Ovsyannikova received the Vaclav Havel Human Rights Prize in Oslo. The award is given every year by the Parliamentary Assembly of the Council of Europe to honor outstanding acts in the defense of human rights.

This award, like her job as a freelance correspondent — without pay — at Die Welt, has caused something of a furor in Moscow.

On March 14 Ovsyannikova jumped onto the set of Vremya on national Channel One — one of the most watched, and possibly one of the most dishonest, newscasts in Russia. She stood behind President Putin’s favorite anchor Yekaterina Andreyeva and held up a homemade banner that read in English “No War” and in Russian “Stop the War. Do not believe the propaganda. They’re lying to you here.”

Ovsyannikova was on air for a couple of minutes before the producers had the presence of mind to cut to another video segment. Then the security guards escorted Ovsyannikova off stage and handed her over to men in uniform, who interrogated her for 14 hours before until the court ordered her to pay a 30,000 ruble ($370) fine. Ovsyannikova was fired from Channel One’s information service.

After she was fired, Kirill Kleimenov, head of the so-called “news directorate” of what is really the state propaganda channel, accused her of treason. He transparently hinted at her connection with the British Embassy, where he alleged she called five minutes before she went on air.

It’s like an old joke in Russia: The English Queen is causing trouble for us again.

In addition to the charge that led to the fine, another case was filed against Ovsyannikova. But Ovsyannikova’s lawyer Sergei Badamshin, said that the judge had accepted the second case and then the very next day unexpectedly sent it back for further investigation by the police.

The reason for this about-face might have been a phone call from French President Macron, who promised to follow her case. It is also possible that Macron said something to Putin as well, and that Putin gave an order to hold off on another charge against Ovsyannikova — at least for now.

Her hiring by Die Welt and her award have raised a lot of journalists’ eyebrows.

I had a long and detailed conversation with Ovsyannikova, available in print and video, because I was curious about what drove her to do what she did.

After speaking with her, I came to the conclusion that Ovsyannikova committed an act of personal courage. Without having even the slightest bit of experience in political resistance, dissidence, or protest, she marched into the den of the beast with an anti-war poster. This was an act of utterly reckless bravery. And it was done while many of those journalists with raised eyebrows were leaving Russia faster than the wind, buying tickets to Tbilisi, Yerevan, and Astana — that is, to peaceful countries, not Ukraine.

Why did a well-groomed, well-to-do woman who lives in a gated community near Moscow, decide to take such a desperate step? Pure emotion. Ovsyannikova’s job was to watch Western television channels non-stop. All day she witnessed the nightmare of what was happening in Ukraine — the bombings, the corpses, the burnt-out and destroyed houses. All day she watched CNN, BBC, Sky News… She saw it day after day, heard what the news presenters of Vremya said, and finally she couldn’t stand it. She was, after all, Ukrainian on her father’s side.

This didn’t mean that she would become anti-Putin or join the resistance. Not at all. But she was seen by the tens of millions of viewers of Russia’s most popular TV channel, viewers who were drunk on propaganda. And what makes this step of desperate resistance all the more important is that it was the act of an average person.

It was, in the end, simply the normal reaction of a normal person who is could not pretend that dead bodies and other people’s pain were none of her concern.

An earlier version of this article was published in Russian in The New Times.